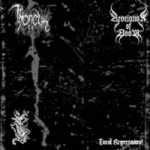 What is the reason for bands to play a cover-version? Maybe they want to pay tribute to their sources of inspiration, maybe they cover the songs they personally like, maybe songs that they are used to play on gigs or in the rehearsal-room. Or maybe a song challenges them, which is pretty far away from their own style. So far traceable and I guess no one is irritated by a cover-version at the end of a full-length. One cover version, but on "Total Regression" are seven cover-versions and just two new songs by each band. The bands that got covered are DESTRUCTION, IMPALED NAZARENE, UNLEASHED, MORGOTH, HELLHAMMER, TERRORIZER, SODOM, PANDEMONIUM and BLASPHEMY. Since I like almost all of those bands and the cover-versions are well done it is quite enjoyable for me to listen to this output, but I would never pay any money on such a release. Even not if this is sold for the price of a mini-album. Instead of releasing such an album it would have been better releasing a 7" vinyl single with the two own tracks of each band or adding some old demos or live stuff instead of the cover-versions. The two songs by THRONEUM can be described as Black Metal influenced Death Metal or vice versa, whereas REVELATION OF DOOM definitely head for old school Black Metal. Both bands are able to leave an impressive mark, really good material. Exactly the right appetizer to get hungry for more stuff. So again each one has decide on his / her own whether or not to spend money on an album like this. www.geocities.com/throneum, http://revelationofdoom.co.nr