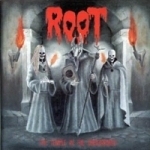 ROOT
The Temple In The Underworld
(I Hate Records)
61:17min

"The Temple In The Underworld" was ROOT’s third album, and what an album it is. This is the album in a band’s career that, when released and toured for, the band will be forever held to as a standard to meet and surpass. ROOT have made great albums since "Temple…", but nothing the glorious evil they achieved with this record. Incorporating Czech and Russian folk music, the band crafted songs that sounded both exotic and mysterious. One can imagine the devil prancing around a darkened field of sheep, a steel edge of murder in his eyes. The album is an epic Black Metal opera minus the electronic keyboards. Songs such as ‘Message’, ‘Temple In The Underworld’ and ‘Casilda’s Song’, are more like movements than they are oustanding songs. Do yourselves a tremendous favor and buy this re-issue immediately. In addition to the masterful tracks that appeared on the original, there are three bonus live tracks, one from 1993, the other two from 2004. Big Boss and company will thank you from Hades. http://rootan.net, www.myspace.com/rootcze, www.ihate.se