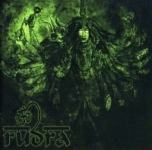 "RUDRA is a god of storm and diseases, and a form of the God Shiva (Shankar). He is more destructive than Shankar himself." With this explanation of the name of the band it is that I am exposed again to this monumental piece of blackened Death Metal from Singapore. They have called this unholy chants of destruction and desolation as Vedic Metal, a term used to pay tribute more than the music of their region, to what it is exposed through their lyrics to the history of their homeland. And so we are transported to a land of magic, of Vedic Warriors and domains of desolation, where the deserts are hopeless and where the vultures are there to devour the souls of those who dare to venture into this cursed, yet magical lands. If I have to describe their sound, I would say they are between the early Death Metal era of BEHEMOTH, with some touches of NILE and some early PESTILENCE is to be found in it, with a distinctive Speed / Thrash influence, and a blackened voice which loosely reminds of ANGELCORPSE. Making my memory to work, this is quite close in style to GOD DETHRONED, and with some technical aspects close to NECROPHAGIST, to give another point of reference. Blessed with a powerful modern production, yet not as synthetic as some producers think is necessary for Death Metal, the band delivers a very strong effort. There are more than a few instrumental sections where they pay homage to their motherland music, but you can also actually feel some of that influence in their high speed terrorizing Metal of Death. At first glance they do remind you of someone, but then again, you can feel they are different… they invoke images in of warriors which lived by the sword and fought thousand headed serpents and multi-limb god-devil creatures while searching for revenge. The composition skill the band possesses is one of the strong points here. Add to that a masterful execution, with a very inventive guitar players and a solid rhythm section, where they dwell between a dark melody and a very aggressive yet mysterious aura like in the song ‘Hymns From The Blazing Chariot’ with a fantastic guitar soloing which fits perfect within the destructive and intense pace of the song. Then they also spit fire from a calm start in a song like ‘Advaitamrta’ to enter then into a neck breaking riffage of the highest caliber I have heard in a long time. If there is a time when the word "epic" can be used in Death Metal, it does surely belong here. In the songs ‘Immortality Roars’ they try a weird mixture of Vedic sounds and some Death Metal growling /drumming which is actually interesting for a while, but tends to became tiring after a few seconds, so I would suggest the band to keep that kind of experimentation in a shorter level. And the last thing I found here is that maybe the album is a bit long, as the style is more set for probably shorter time in one listening. When I was becoming a bit tired of a similar style in a couple of consecutive songs, which were good but not outstanding, they throw up a killer hymn in the form of ‘Avidya Nivrtti’ that seems to be written in their native language. This song even proves them to be capable of creating technical complex songs, yet maintaining a very straightforward essence. To end this masterpiece, they are throwing blades of fury with ‘Majestic Ashtavakra’. RUDRA will appeal to many Metal fans, not only those looking for a brutal blackened Death Metal band, but also looking for a more technical side of things and played with style, quality and conviction. I just hope that the final battle with the god of storm ends up in a chaos to be continued… www.rudraonline.org, www.vicrecords.com