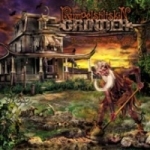 If there is something remarkable about Relapse Records then it is their huge amount of weird, inventive artists and their good hand in discovering new acts who offer innovative, fresh sounds that usually make the good ol’ old school maniac go postal (I know from experience)! Now we have a nice little record here by a band that seems to worship the Brothers Grimm and their fairy tales (fits to the start of the new movie “Brothers Grimm”, right?) at least guessing from the band name, of course that’s not the case. Founded in 2002 the quintet released a split 7″ with JUMBO’S KILCRANE and a live album named “Raped By Bears” whose title underlines again that this band utilizes a lot of humoristic, at times macabre but mostly quite silly lyrics and titles. Musically diversified Thrash Metal with references to the old Teutonic school of KREATOR and aggressive, rhythmic innovators such as PANTERA is what you get offered on “Buried In The Frontyard”. In addition to that some twisted, slightly progressive guitar-passages, some excursions into Death Metal, acoustic guitar parts, catchy PANTERA-ian hooks and some decent melodies now and then spice up this highly individual sounding album. Tempo-wise RUMPELSTILTSKIN GRINDER mostly concentrate on the typical, heavy “Vulgar Display Of Power” midtempo crunch, which together with the vocals adds also a certain Hardcore / Thrashcore-edge (like e.g. D.R.I., S.O.D.) to the bands’ variable sound. Of course you also get some up-tempo parts ranging from the double bass-driven shredding to a few blasted sections. The lead guitar performance is very “Metal”, so to speak – ripping, fast yet melodic – it accentuates the traditional elements the band integrates into its sound. Overall you should get the impression that this album definitely has a lot to offer though at a traditionalist-home base such as the Voices website it will be probably shunned by most readers. “Buried In The Front Yard” to me is well-done, variable Thrash Metal that fits the contemporary liability to crossover and is an entertaining, cool album that maybe lacks a real smasher, but should delight any open-minded Thrasher, who digs KREATOR, SLAYER as well as the godly PANTERA. www.relapse.com.