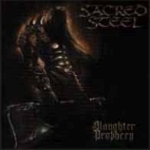 I could praise this band for hours as I rate them the most outstanding Heavy Metal act existing on this planet. But don’t be afraid, I will spare you the most of it to concentrate myself on this new offering, their most brutal to date should I hasten to say. No wonder with a title like “Slaughter Prophecy” that the music sounds almost like Death Metal at times, just listen to the beginning of the title track and the ending of ‘Invocations To The Nameless Ones’, and you will swear that SACRED STEEL just turned out to be the new Death sensation of the day. Even if the band have kept their traditional flavor, I see them more and more bent for achieving a harmonious synthesis of all the sub genres of the Metal universe that are Heavy, Doom, Death, Thrash and Back Metal. They sort of converge towards the same point as BAL SAGOTH I could say, going backwards the path the Englishmen follow. And let me tell you that the result sounds awesome. In fact, “Slaughter Prophecy” is packed with epic, sinister, dark and romantic Metal; figure out a blend of JAG PANZER, TROUBLE, AGENT STEEL, SLAYER, KING DIAMOND and MORBID ANGEL and I guess you will get a rather precise image of what you can find on this marvelous album. Each of the five band members shows his passion for Heavy Metal here, as it has always been the case, just read the appreciation list of singer Gerrit Mutz and you will understand what I mean. Before being musicians, the SACRED STEEL warriors are above all fans of the music itself, just like us, and I think that makes each of their four albums to date something very special and authentic. I can’t personally pick up any standout tracks, because the whole album flows like in a dream, and I don’t want waste my time and yours trying to convince somebody to buy this milestone. “Slaughter Prophecy” stands for itself, and if somebody should ignore it, that’s not my problem really. If you fortunately decide to buy this release, go for the digi or vinyl formats, because they both feature an extra-track, and not a filler one believe me (and not a cover version either!). JOIN THE METAL CRUSADE!