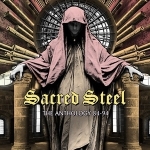 SACRED STEEL, aggressive Heavy Metal from Germany that we all have headbanged a lot to during the years, or well no, not this SACRED STEEL. They hail from Chicago and never made that much fuss, before they disbanded in 1994. So I reckon not many have heard about them, and that is quite a shame as they started out quite strong with their first demo, which is present on this anthology, together with some live tunes and their ’94 self released EP "Vampire", which really isn’t the real SACRED STEEL in my humble opinion. The band starts out with a good classic brand of Heavy Metal / NWOBHM just as I like it, a good pace, some great guitar play, good catchy tunes and a great vocal. The track ‘Breakin You Down’ should have been a Heavy Metal classic, though it might not be too late, when this record hits the street. Live we are getting ‘Breakin You Down’ again, which also works really well live, and the never studio recorded ‘The Lord Of The Night’ which also has some great potential. Together with cover versions of BLACK SABBATH’s ‘Heaven And Hell’ and THE BEATLES’ ‘Helter Skelter’ both done by the book, though with some energy and passion, and the vocals fits ‘Heaven And Hell’ really well. The ‘new’ EP "Vampire" takes the band in a new and more melodic and Rock friendly path, that I don’t think fits the moniker the band has. Understand me right, it is not bad music at all, though just way off what they made in the 80s and is here trying to hit the radio friendly Rock / Heavy Metal wave. The 4 tracks are enjoyable and catchy as hell, though quite boring and predictable compared to the first demo. SACRED STEEL did good back in the days, quite a shame that they weren’t discovered, but it was another time back then, and it wasn’t that easy to get signed or get the music through to the masses. Kudos to Blood And Iron Records and Metal Soldiers Records to have dug the music up from the past, and to have unleashed it on the masses, as the music deserves some attention, and now I will be looking forward to seeing ‘Breakin You Down’ being covered by a few bands out there! I don’t know if TWISTED TOWER DIRE ever have heard about SACRED STEEL, though they have some of the same feel in their music, on their first couple of albums, so if you like what they did, this is also up your alley! More info at: www.bloodandironrecords.com, www.metalsoldiersrecords.com