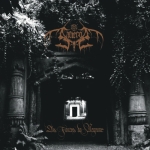 SARTEGOS comes out from Galician lands where the Metal scene is strong and this is their first mini album release after a couple well received demos. In fact it already came out as a 12"LP version on I, Voidhanger Records and as mini CD on Bloody Productions. Now here I have the limited edition (200) tape version released by my new favourite Death / Black Metal label from Portugal – Caverna Abismal Records. I’m reviewing their 4th release here and for the fourth time in a row I have to start conjuring adjectives on how professional and great it is. So, on to the music… SARTEGOS play Death / Black Metal heavily influenced by (old) ROTTING CHRIST, MYSTIFIER, MAYHEM, MORTYARY DRAPE, NECROS CHRISTOS and suchlike. Their songs usually last for 5-6 minutes and are fully developed compositions meant to enshroud you with a dark, mysterious atmosphere. It is obvious that SARTEGOS, led by main composer, guitarist / singer Rou together with drummer Vindok, take their dark Death Metal with southern Black influences very seriously on every level – from lyrics sung in Galician, to overall presentation and what’s most important – music. And this is the type of blackened Death Metal that stirs the dark flames in the depths of my heart – the tempos ranging from grinding blast beats to torturing Doom passages and more traditional Thrash Metal influences creep through here and there. Murky, low tuned sound enchances the mysterious atmosphere, while the riffs keep rolling and weaving this gnarled web around you. This combination of different elements manages to morph into alchemic Black Art, totally into its own world, that separates SARTEGOS from the countless faceless Black Metal bands and the totally professional realization makes me a fan of this Galician duo. For more info on how to get this limited tape check here. Label contact: http://cavernaabismal.blogspot.com