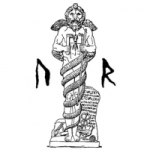 I listened to this tape initially expecting to find little of interest to me. This tape, however, turned out to be one of the most stunningly executed works of Doom Metal I have encountered in quite some time (note that this same recording was subsequently released on CD by Psychedoomelic Records). The first aspect of the recording that stands out is the production value. The introductory track initially sounds as if it were recorded underwater. Although this is an intentional effect the band is going for, initially one may suspect that the tape was poorly dubbed (this should not be construed as criticism… the intro track is actually one of the many positive attributes of the recording). Once the second song begins, the instruments are clear and audible, yet the entire recording is set upon a foundation of murkier, low end layers of sound that contribute to the fullness and unique quality of the recording. The contours of the music have been shaped in such a way, at times, as to avoid the sharpness and distinctiveness of the instruments’ attack in favor of a lurching and monolithic structure that coalesces into a single composite unit. The end result is one of sonic opacity. Lest such a description should suggest a more modern approach to Doom, the song composition and the instruments employed by SATURNALIA TEMPLE are decidedly traditional and at times evocative of styles ranging from WITCHFINDER GENERAL to SAINT VITUS but with a darker and more psychedelic atmosphere. SATURNALIA TEMPLE’s decision to record in this fashion creates an authentic sound that is not confined to particular time period. The riffs that comprise the songs guide the listener toward darker realms by virtue of the deviant chord structures that augment their occult imagery perfectly. Like many other bands that delve into this area of Doom Metal, SATURNALIA TEMPLE invoke a substantial amount of psychedelic influence, but, although psychedelic at times, the subject matter of the music does not revolve around the trite topic of drugs (at least not overtly or heavy-handedly). The focus, instead, is the ascendancy of the mind in the wake of the rising currents of magical and ancient forces permeating our world. Like the use of psychedelics, delving deep into the esoteric opens the mind to concepts and images that allow one to transcend the confines of the ordinary world around us. Although this is obviously not a novel concept in the world of Metal, it is a particularly welcome aesthetic adornment for a band playing traditional Doom and SATURNALIA TEMPLE approach it in a manner that cultivates an entire atmosphere of occult and esoteric visions. Moreover, SATURNALIA TEMPLE’s music does not sound like a modern interpretation of traditional Doom, but rather a band that is sincerely committed to preserving an art ancient and revered in its archetypal form. Every component of this release operates in unison to create a sound that, although each element is distinct and prominently displayed, is a sum far exceeding the value of its parts.