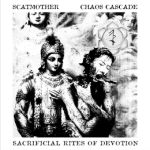 Abuse, overload, saturation and complete obliteration. Thus the magnificent, yet slightly repetitive world of harsh noise was created. Purveyors of audiomassacres such as SCATMOTHER and CHAOS CASCADE, both from Germany, are willing to show you how harsh their no-input mixers, pedalboards or whatevers can sound. CHAOS CASCADE (whose previous appellation was as superlative as SATANS KARAOKE SLEAZE ROLLERCOASTER) showcase a pretty academic and trite adoption of sadism-meets-Satan imagery. You’ll never hear me say that the only good moments in this kind of music are the most recognizable or vaguely rhythm-based ones, not at all. Still, there really isn’t anything relevant on their side of this split apart from some darkly pounding beats on the track ‘Abattoir’. Backwards to side A you have split mates SCATMOTHER drawing some kind of conceptual inspiration from Evola, Grant, Nietzsche and Hinduism. Here the atonal layers are slightly more interesting and somehow thicker. ‘War Brothel’, for instance, features some more valuable fragments. Power electronics freaks missing the good old WHITEHOUSE, GENOCIDE ORGAN or early CONTROLLED BLEEDING days might open up their hearts and wallets to these two lovely-sounding acts. "Sacrificial Rites Of Devotion" is out now on CD and LP via Dunkelheit Produktionen. Throw yourself into sheer comfort by checking out www.facebook.com/scatmother-158975218208360, www.facebook.com/chaoscascade and www.dunkelheit-produktionen.de.