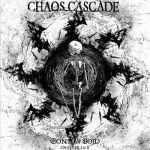 The last song is titled ‘Your Existence Is a Joke’ and unintentionally CHAOS CASCADE anticipated my opinion about this release. “Son Of The Void (Chapter I & II)” is a joke. But let’s tackle things one at a time. CHAOS CASCADE is a one-man band, run by DLS666 (Oliver Roder), who is also part of the famous German Grindcore legend and inventors of Porngrind GUT. Besides GUT he always got on with projects like LIBIDO AIRBAG or NUNWHORE COMMNADO 666 and with R.O.D. he even took a side trip to a non Metal genre. CHAOS CASCADE was spawned 2014 out of the remains of SATANS KARAOKE SLEAZE ROLLERCOASTER and the present release is already full-length number three. Although I am from Germany and although I listen to Grindcore it is my first encounter with CHAOS CASCADE. Maybe the reason is the kind of material, nine tracks which I refuse to call music. Because it is just an accumulation of computer generated noise. Well, there are various types of noise, some people even say the whole Heavy Metal genre is nothing else than noise. But in this case it is simply not any kind of Metal music which is presented. Only two tracks (‘Feed Them With Filth’ and ‘Infinite Damnation’) are something of an equivalent to what can be described as Industrial Grindcore, but that is too little for an album. Maybe some readers remember the album “Ethos Musick” (1994) by American based EXIT 13. There was a warning written on the back cover, saying Relapse Records will hold no responsibility for destruction of loudspeakers. Personally, I would not take it quite that far, but shortly before. My answer to the famous question “Is this art or can it be tossed away?” is already given at the beginning of this review. If anyone nevertheless feels the urge to make an experience with CHAOS CASCADE more information can be found here www.facebook.com/chaoscascade or here www.dunkelheit-produktionen.de