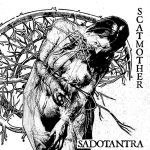 Well, to be honest, it is not Industrial and Noise and the niche styles within that scene, I have spent most of time listening to, during the years. I’ve stuck safely with Industrial and Noise with Rock and Metal elements to it, or most likely the other way around. Though now German SCATMOTHER has taken me a tad further with the album “Sadotantra” which offers Power Electronic meshed with Harsh Noise, Post Industrial and ear-ripping Noise. The 10 tracks power forward driven by distorted and compressed sound effects and harsh and sick vocals. There isn’t an actual rhythm, though still a recognizable pattern, once in a while at least. A journey through misanthropic aggression to melancholic soundscapes of dystopia and mysticism. The album and music took a few listens to get under the skin, though when patterns starts to show up, the intensity and outlashes of hate and frustration, starts to work together with the noise and soundbursts, it actually makes great sense and takes you on an insane, captivating, violent and rancid rollercoaster ride! Enter room 213: www.facebook.com/scatmother-158975218208360, www.dunkelheit-produktionen.de