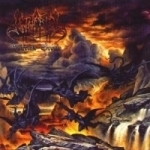 While a certain Norwegian band takes the world by storm thanks to a formidable commercial war-machine, I am afraid this new album by SETHERIAL could stay unnoticed, despite its amazing qualities. But believe me, “Endtime Divine” is another masterpiece in a so far faultless discography. To me SETHERIAL are simply the best Black Metal band in activity, I am not afraid to say they crush the competition with ease! And the nine tracks on this album easily prove my point. The SETHERIAL music makes me think of a cyclone of fire, and the band combine extreme brutality with a concern for finesse and melody. The overall atmosphere of “Endtime Divine” is one of grandiose tragedy, and SETHERIAL achieve this result without any use of fancy and trendy arrangements: no nice synths, no modern samples, no folkloric overtones, only furious guitars, insane drums and no less insane vocals. Fans of DISSECTION should notice SETHERIAL, as the two bands share lots of common characteristics. And let’s say that SETHERIAL are vastly superior to DARK FUNERAL, even if the two are very alike sound wise: this is due mainly to the formidable talent the SETHERIAL warriors have for songwriting. Indeed, each of the tracks are made of numerous parts, all equally brutal, and you will find yourselves engulfed in a true tempest of madness and grief once you push the “play” button of your CD deck. Add to this a deluxe production courtesy of the famous Peter Tägtgren, and a superb cover painted by the cult artist Necrolord and I suppose you can figure out how good “Endtime Divine” really is. No need to waste my time and yours reviewing this any further: “Endtime Divine” is a CD you have to put in your collection. Well, SETHERIAL rimes with essential after all! (Un)GODLY! Enter the SETHERIAL kingdom at www.setherial.com, and fear you cannot return!