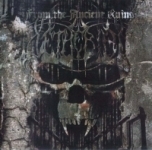 It was thanks to the review section of the printed version of Voices From The Darkside that I was first introduced to the SETHERIAL dark realm. I remember pretty well Frank’s enthusiastic review of the first album of this Swedish Black Metal act (“Nord…”) and I bought the CD not long after. Since then, I am addicted to SETHERIAL’s music and never failed to get all their albums without bothering to listen to them first, confident was I in the fabulous quality of their music. After the release of their third masterpiece (“Hell Eternal”) in 2000, SETHERIAL seemed to have disappeared from the surface of the earth, and I feared it was for good. Fortunately I was wrong, as the band signed a new contract with Regain Records after having solved logistic problems, with a brand new album due in mid 2003 (that is: now!). So, “From The Ancient Ruins” marks the end of an era in the SETHERIAL history, and appears as a very special offering. Of the nine tracks gathered here, three of them were laid down during the “Hell Eternal” recording sessions, while the remaining six come from a 1994 demo. I can understand why the three most recent tracks never made it on “Hell Eternal” as they show a slightly different aspect of the band’s talent. On them, SETHERIAL, usually a band dedicated to ultra speedy material, slow their pacing a great deal, to the profit of a search of moody (yet still brutally textured) atmospheres. For instance, the arpeggios in minor mode you can hear at the end of “The Ancient Ruins” are typical of what you can find on a MANILLA ROAD album, I know it may sound odd but that’s the way I feel it anyway. The third track (‘The Beyond’) is none other than the SETHERIAL re-interpretation of the classic score of Fabio Frizzi for the classic Horror movie “L’Aldila”, nice but non essential. The demo tracks are an entire story though, as SETHERIAL, still in their infancy back then, show already what made them so essential as soon as their beginning: a perpetual quest for unusual arrangements and original ideas within the frame of a well known musical genre, classic and brutal Black Metal with special flavour and a majestic touch (without being “symphonic”). It is very difficult to exactly pinpoint what separates SETHERIAL from the flock of stupid and boring bands loudly claiming they are more “evil” than the others. Or maybe you just can call this unknown factor “talent”? The fact is that the six 1994 songs come out as a absolutely captivating and exhilarating listening experience, despite an average (and understandable) sound quality. Believe it or not, I even found some primitive AT THE GATES vibes here and there (in a song like ‘The Ancient Sphere’ for instance), that tells a lot I guess about the very special abilities of the band. I could write for hours about the SETHERIAL brilliance. Let me tell you I am simply happy they exist as they always offer us so great songs and albums. But it is not my intention to waste a single minute more trying to convince you to get this CD. Don’t waste too much time yourselves, get all the SETHERIAL releases (you may even trade your corporate Black Metal albums to do that), and you can even add to your shopping list the first IN BATTLE (a side project of the two stable SETHERIAL members) release, as it is the best Black Metal album having surfaced after the year 1990, no less. SETHERIAL is Black Metal, period. They make real music, not a product destined to pubescent teenagers. Another crushing release by an exceptional band!