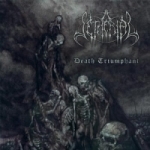 The first draft of this review was on the extremely positive side, biased I was by my long time attachment for SETHERIAL since they issued their first masterpiece ("Nord") ten years ago; along the years I have never missed a new SETHERIAL record, no matter what. But with hindsight, I was forced to erase the first version of this review. What happened? Simply that after the first listening session, which was rather pleasant but nothing more, I found out that I wasn’t compelled to give the CD another spin. Further hearings proved to be unsatisfactory. The fact is that "Death Triumphant" doesn’t bring forth something new and daring. SETHERIAL seem to be petrified on this, offering a rather cool epic Black Metal but without spicing the things up with fresh ideas. The problem is that these last few years, Black Metal bands appeared to redefine the whole genre (here I content myself to cite ONDSKAPT and DEATHSPELL OMEGA). SETHERIAL now appear to be at the rearguard with their slick and tightly formatted music. Add to this that the production on this is rather thin, the instruments have room enough, but maybe too much, the drums in particular sound very trebly and synthetic. I would have preferred the insane wall of sound of "Hell Eternal" or the foggy and mystic atmosphere of "Nord". Don’t get me wrong, "Death Triumphant" is a good album, but I am afraid the SETHERIAL warriors are out of ideas for the moment, and perhaps a little tired of all this; they obviously lack stamina, a shame for such an intense band. Even if I stay faithful to them (but surely considering buying their next album second hand), recommending this record as an essential purchase would be intellectually dishonest. Check out the band website: www.setherial.com.