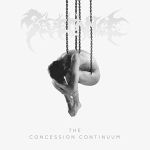 Texas Death Metal stalwarts SEVERANCE have been cranking out the jams with demos since the late 80s / early 90s. The band has had its share of line-up changes in the 30+ years they have been together but the one constant has been the heavy hitting skinsman Jaime Perez (no relation to the reviewer). The band has taken a lengthy break between albums with this latest one being about 6 years from their previous (2011’s “The Truth In Question”). Let’s dive right into the self-financed album and see what we have in store. Artwork wise the front cover has someone in the fetal position being held up by chains pierced through the skin. The album kicks off with the head smashing ‘Conceeding To Consequence’, the guitars, drums and vocals are just punishing and devastating. Very catchy, very intense and following the formula that SEVERANCE has maintained on each album. I lost a bit of momentum with track 2, ‘Myopic’, which felt a bit like a filler in my opinion. The song was not bad but just didn’t have the same vibe the previous song had. ‘Silenced Insolence’, ‘Idle Idol’, ‘Stripped Of Innocence’ and ‘Dying Aspirations’ pick up where the first track left off with some solid riffs and guitar solos. ‘Intent’, the only instrumental track on the record, was fascinating. Clocking in at just shy of 2 minutes I think this song would have been a great intro to the album but instead builds a bridge between the first and second halves of the record. ‘Sym-Pathetic’ kind of fell in that same category as ‘Myopic’ where it seemed it was just missing that X factor to catch my full interest. ‘Tiempos Muertos’ has an old school guitar riff at the intro that reminded me of some early 90s Death Metal. The music then kicks it into high gear and we have a full on neck cracking jam, but just when you get into the groove the band tones it down at about the 2:20 mark only to pull you in for round 2 at the 3:30 mark. This leaves us with the final track and also the longest on the album, ‘Dying Aspirations’. As I noted earlier it continues where ‘Conceeding…” left off. Heavy riffs, decimating drums and vocals that spew the rage. I really enjoyed the guitar solo at the 5:00 mark, very entrancing and it blends well with the rest of the music to the point where it continues until the end of the song. SEVERANCE has continued with their path of destruction with this album. The drumming on this album I can’t speak enough about and highly encourage any readers that are drummers to check out Jaime’s chops. The album has a really good production value where all instruments and vocals are captured properly and not a sound where some instruments drowned out others. The band continues to carry the flag for Texas Death Metal and in doing so, for the amount of time, they have been easily qualifies them as elder statesmen of the genre. For more information please visit: www.severancemetal.com, www.facebook.com/severancemetal