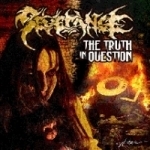 If you’re into heavy and grooving Texan Death Metal, with a more than healthy dose progression and technical show off from the musicians, you must already know SEVERANCE, a band that has been a stable deliverer of that exact blend since the mid-nineties. It isn’t that the band has been putting out a lot of records for a band being around since 1989, though since the change from heavy and off the mill Death Metal, they’ve been stable purveyors of quality technical Death Metal with a heavy and crushing base. A style they are nearing in perfection, with this, their 3rd full length album “The Truth In Question”. It is like SEVERANCE never has hit ground within the technical Death Metal community, why? I can’t really tell, as their previous recordings have been decent to good, though with this new balanced and yet over the top output, I’m sure they will hit their base and make some noise. The base of the music is immensely heavy and pounding, the growl mean and a menace to the surroundings, guttural yet ear piercing. And even though we are getting a blitzkrieg of intriguing rhythm patterns and heaviness én masse from the rhythm section, the real gem on this record is the godly guitars. Damn we are getting some crushing and catching riffs, spiced up with killer slow leads to blazingly fast solos and ripping shredding. All mixed well in with the heaviness and crushing, almost doomy tone of the album. I can’t recall much Death Metal being this heavy since the heydays of BANISHED, BRUTALITY and MORTA SKULD, and that topped with the progressive technical overdrive, makes this album one that I enjoy. The production might be a bit to sluggish and messy at times, some more room for the different instruments would have done the music well at times, but again a too clean and clinical production would have massacred the album as well. SEVERANCE is back after 5 years silence with a heavier than heavy ripper that hopefully will open some more eyes to this excellent band from Texas. Music as this reminds me of my love for heavy and technical Death Metal done the old school way with new inputs that doesn’t kill neither music or soul in the effort to reach new heights or just a plain good old album! www.severancemetal.com, www.myspace.com/severancemetal, www.sevared.com, www.myspace.com/sevaredrecords