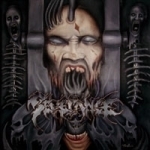 I remember Severance from some years ago as their first full length (“Whatr Lies Ahead”) had to be released by Repulse Records, but it was just in the moment when they started having troubles and finally ended closing up, although I think the album was finally released (perhaps it was the last release of the label?). Anyways, I never listened to them until I had to review this “Suffering Humanity”, and I must say the first impression was a bit confusing, as, on one side they are playing a quite cool sort of Death Metal, with some brutality in it (especially coming from the drums and the vocals, which are quite gutural but not too much) but without forgiving some dark stuff too, remembering in some parts to MORBID ANGEL, mixed with some Texas styled blasting attacks, but on the other side we have a production that doesn’t make justice to the music inside, and which makes the listening a bit hard, as, although not sounding like a demo, it is not as clear as it should be, and sometimes the drums and the guitars would be much better if they were more defined. But let’s put that on one side and simply trey to focus on the music, and then I can’t say this is bad, it’s certainly not specially original stuff, but quite entertaining. As I said before, the vocals have an important role here, being quite down tunned and pretty groovy, with some Frank Mullen’s influence. And the drummer is not bad at all, he definitely knows how to blast but doesn’t need to do it all the time like so much bands. Apart from the ten songs plus outro included, you can find a cover of Death Metal fathers PENTAGRAM (‘Fatal Predictions’) and a video of the second song, ‘Consumed’, so the CD worths it’s price if you’re into this kind of stuff. www.goregiasticrecords.com