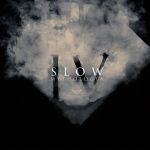 This is the seventh full length from Belgian Funeral Doom band SLOW. Olmo Lipani (aka Deha), formed the band back in 2007 and he has been taking care of all instruments and vocals up to this album, where Lore Boeykens (aka Lore), joined the band and contributes with bass, lyrics, and backing vocals. This is a re-recorded version of the "IV – Mythologiæ" album, which I haven’t heard, so I have no point of comparison. There is also an ambient only version entitled "IV – Mythologiæ (Ambient)", if you wish to dig further into their discography. And believe me, I will. And even though I have been a fan of Doom Metal for years, this is the first time I have listened to any of their material, which is just amazing. The atmosphere is surely oppressing when the songs are bludgeoning the listener with open chords, deep growls and pounding drums and bass. But there is also beauty in this beast of an album that comes in the form of clean vocals, keyboards and airy arrangements. The mix of depression and hope certainly clashes, but it is that contrast that makes "IV – Mythologiæ" such an interesting trip into extreme music. The production is thick as a brick and the dynamics successfully respond to the intention of the songs. The segments that are meant to be calm and pleasant feel airy and the distorted, heavy parts are simply crushing. When it comes down to the mix, this album is probably one of the best I’ve heard in this sub genre. The keyboards are well placed behind the wall of guitars. And the rhythm section is really solid. I was actually surprised by the drum and bass performances, since in this kind of music, keeping things interesting is key. And every instrument plays its role perfectly. The album clocks at 72 minutes. Such a long session is only accomplished by good songs. And in this case, both Deha and Lore deliver the goods. This album is a voyage, a trip into a dark horizon with no destination. Really, it’s been a long time since I have enjoyed an album this much. In my humble opinion, Funeral Doom and Doom Metal in general is a misunderstood sub genre that translates feelings into dense music made with light and darkness. An extreme contrast that demands the listener to sync with the atmosphere and learn to enjoy this aural art. Check out the band at www.facebook.com/slowdooom and get this great album from www.code666.net