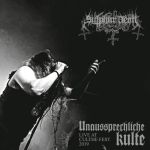 Recorded live at the Culthe Fest in Münster, Germany in 2019, “Unaussprechliche Kulte” is SULPHUR AEON’s first live album. And such an amazing one it is. SULPHUR AEON is one of those bands that impressed me since their first album and they have been evolving amazingly through their career: a demo, an EP and 3 studio albums so far. It has been years since I haven’t heard such a fierce and perfect combination of aggression, composition and atmosphere in a Death Metal album. Also, there have been countless bands that have used Lovecraft’s Cthulhu mythos to base their music and lyrics on, but few have been as successful as SULPHUR AEON to faithfully represent such enormous and overwhelming literary work. The atmosphere in this live recording has both theatrical aspects and a ceremonious feeling that make it unavoidable to Death Metal and Lovecrat fans alike. The live versions are simply shocking. Oozing sea-salt humidity from aeons past, the set covers songs from their 3 albums. In my humble opinion, the amazing new takes on ‘Incantation’ and ‘Swallowed By The Ocean’s Tide’ from their first album, sound a lot better in a live situation. The dual guitar treatment of Torsten and Andreas on these songs make them come alive. Daniel’s drum work on ‘Devotion To The Cosmic Chaos’ and ‘Diluvial Ascension – Gateway To The Antisphere’ is spot on. His precise and sharp patterns flow effortlessly and they also feel so natural, despite the technical and already difficult nature of these songs off their second album (and my fave by millimeters) “Gateway To The Antisphere”. Sascha’s bass performance is flawless, gluing both the rhythm and the melodic / harmonic sections with mastery. This show was focused on their last album, the also great “Scythe Of Cosmic Chaos” and its songs, ‘Cult Of Starry Wisdom’, ‘Yuggothian Spell’, ‘The Summoning Of Nyarlathotep’, ‘Lungs Into Gills’ and ‘Thou Shalt Not Speak His Name’ round up an almost perfect setlist, full of dynamics and Martin’s growls, yells and ritualistic vocals. And as a special treat (I guess), they chose ‘Ruins Underneath The Waves’ off their excellent “Deep Down They Sleep” 2012 EP. A song I would never expected to be included here. Production wise, the overall sound is heavy and thick, yet the mix is clear and instruments and vocals share the audio spectrum perfectly. All performances are flawless; a logical expectation coming from such seasoned musicians. The audience on this date witnessed not a concert or a gig, but a ritual in every form. If you are new to SULPHUR AEON this live recording would be a perfect way to start your journey. If you are already a fan of their music (like yours truly), this album is a must. All in all, Lovecraft would have been proud. Simply astonishing! Show the band some support here: www.facebook.com/sulphuraeon. And get this album from their label here: www.van-records.com