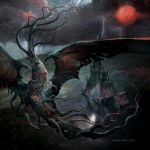 It might be envisioning madness within madness to attempt conceptualizing and conveying the unthinkable aura of Lovecraft’s literary creations. There are few literary universes that have been plundered as deeply by Metal bands as that of Lovecraft’s Cthulhu mythos. While there are many other fictional worlds that have received their share of attention within the genre, few if any of them seem as capable of keeping their sanity for Metal translation as Lovecraft’s terrorizing works. While bands like R’LYEH and THE GREAT OLD ONES centered their music almost exclusively on Lovecraft’s diverse body of work, SULPHUR AEON stand as a unique and possessed musical entity drawing inspiration from the Cthulhu mythos, where they have been proficient to marry their music and concept so effortlessly together. The band’s first two records "Swallowed By The Ocean’s Tide" (2013) and "Gateway To The Antisphere" (2015) received deserving praise and now are placed amongst the most innovative and pioneering genre albums of recent years. Driven by the cosmic energy, SULPHUR AEON came back again to erupt the earthly masses with their third full-length – "The Scythe Of Cosmic Chaos", which was released during the winter solstice in association with prestigious Ván Records on double vinyl record, compact disc and via the known digital channels. Continuing their ethereal and lurking obsession with foul, eldritch horrors, SULPHUR AEON created something colossal, utterly sinister yet distressingly obsessive. Stuffed with uncanny riffs with subversive undercurrent of melodiousness, the band’s Lovecraft worshipping hymns to chaos and destruction encapsulated the essence of Lovecraftian horror which embodies the fear of the unknown we all carry, and the unsettling knowledge of our own insignificance on a cosmic level. “The Scythe Of Cosmic Chaos" channeled that distressing feeling of unimaginable hopelessness with a mesmerizing combination of traditional and progressive Death Metal, Black Metal, other-worldly chanting, and spoken word narration, which stretched imagination beyond cosmic spheres. Augmented by a splendid production – Hellion’s ethereal vocals, Schiemann’s deeply buried bass, and the guitars of Koort and ‘T’ (Torsten Horstmann) produced a deafening wave after wave of sonic assault into our defenseless ears while drummer D.’s every double-bass blast feels like a war of lightning and thunder raging from the depth. ‘The Summoning Of Nyarlathotep’ is one of the paramount examples on the record of the above elements coming fully to bear while ‘Yuggothian Spell’, in the sense of its title, seems like an incantation to summon the great ones. ‘Cult Of Starry Wisdom’, ‘Sinister Sea Sabbath’, ‘Veneration Of The Lunar Orb’ and ‘Though Shalt Not Speak His Name’ mark an abysmal adventure and are garnished with macabre artwork by legendary Ola Larsson. SULPHUR AEON reached the uncharted profundity with courage and creativity which exhibits their implausible song-crafting artistry and surely made “The Scythe Of Cosmic Chaos“ a beyond belief tribute to the great and elder entities which will be rightfully worshipped down the ages. Our earthly and immaterial fleshes will not survive that long, so explore “The Scythe Of Cosmic Chaos” by staring absorbedly into the starless night and contemplate dismal terror of existence amid the cosmic chaos. Find out more about the band at www.facebook.com/sulphuraeon and visit their label page: www.van-records.de.