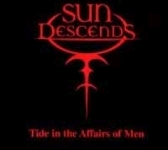 When I think of how overfilled with cliches this review is going to turn out, my hands spontaneously drop the pen and slip off the keyboard. It’s the curse the Metal scribblers have to face these days, though the problem’s roots hide much deeper, in music which is served for Metal today. In The scene. The thing is that SUN DESCENDS deliver so called “old school Thrash”, and that’s exactly where the most ridiculous and idiotic features of the scene feel themselves the most comfortable. Basically, “Tide In The Affairs Of Men” (to be remastered and released by High Vaultage Records as a limited edition CD and 10″ vinyl) is good old Thrash. Old but fresh, dead yet alive… SUN DESCENDS are trying to prove that there is still something to discover in this genre, a sparkle of life in what seemed to be dead and buried for long. Moreover, they definitely believe in that even themselves, at least that’s what their intense and brutal efforts clearly indicate. Besides, these New York thrashers don’t sound either tired or bored, which is a highly important quality for a band with such a serious mission as digging an old genre out of it’s grave. And that dreamlike Thrash spirit of the 80s, the quest for which is a main priority for every self-respecting Thrasher these days – isn’t it anything existing solely in the minds of those old enough to experience it in due time? Some chimera, a kind of perpetuum mobile the only source of energy for which may be it’s inventor faith in his creation? Anyway, capturing that spirit by such a cheap method as blatant stealing old riffs is what SUN DESCENDS leave for Scandinavian ex-Black Metal loosers to play with. Speaking about the latter: what else are they left to do if their background is totally different from that of the ancient ones, being New Wave not of British Heavy Metal but of Norwegian Black Metal? To Hell with them anyway. SUN DESCENDS must have “right” background, featuring in it’s ranks such prominent person as Mem von Stein. I hope VOICES’ readers need no explanation of this man’s role in forging the fame of German Metal, otherwise go and read the EXUMER interview to become wise and cultured. Still it’s definitely not EXUMER. Though it wasn’t going to be another EXUMER either, absolutely not. Moreover, with due respect to Mem, his vocals here are rather special, of a required taste. You see, even though they must be the main attraction for all those who have been missing them since glorious “Possessed By Fire” days, they may turn into a source of either considerable disappointment or pure worship in the end. For they are different. The voice of Mem is still recognizable though, but his manners have changed more than just a bit, being obviously Hardcore influenced (especially in their way of refusing to keep step with music from time to time) and too upfront in the mix. I believe music should be given its chance too. It has a nice quality to grow on you with every listen, and the tracks like ‘Third Column’ and ‘Tide’ (especially the great riffs in the beginning of the latter) are really worth checking out. All in all, highly recommended stuff for all you thrashers around, experience it free from SUN DESCENDS’s homepage at www.sundescends.com. So what about the spirit?