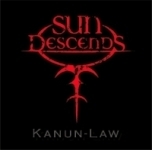 Having read Tartarean Desire webzine’s review on this effort, I once and for all got disappointed in reviews and lost belief in their being of any use at all. You see, what I was going to proclaim the best thing about “Kanun-Law”, colleague Cseke R?bert had found to be it’s weakest point. Well, perhaps the guy was looking for some perfect vocals in the wrong genre, because polished flawless vocal performance definitely isn’t what Thrash has ever been about. Anyway, what a regular Metalhead, unlike us not overburdened with wanna-be-journalistic ambitions, should think then? In this particular case it’s easy though – any old time EXUMER fan is surely going to like Mem von Stein’s vocals here as they bear strong resemblance to the way he used to abuse his throat on the great “Possessed By Fire” album (in fact, it’s exactly what SUN DESCENDS previous effort lacked the most). But generally speaking, two contradicting reviews make no sense whatsoever. Kind of short circuit of opinions. So “Try and listen to this music yourself” must be the most sensible review ever written. Still I have a duty to fullfill, so, with your kind permission, I’m going to continue with my senseless one. Three years passed since the sun began descending in New York. Three years, and still it keeps descending, the world turning and music evolving. Fortunately, an evolution in music has very little to do with the band called SUN DESCENDS as they play that particular kind of Metal which doesn’t need any of it whatsoever. Evolution has touched the band’s line-up though, resulted in Mem von Stein being the only link between two SUN DESCENDS records. Still there’s no reason to complain as his name says a lot to any old time Metalhead. And what a pleasure it was to hear that he happened to recall his “Possessed By Fire” days and tried to bring them back at least vocalwise. I’d prefer it being both vocal- and musicwise, but alas… Even though “Kanun-Law” is definitely rooted in the 80s, it’s frighteningly evident that we deal with the product of current day and age here. Even too evident at times. Though, to tell you the truth, at first I failed to notice that, being blinded and deafened by delight of hearing Herr von Stein singing the old way. Oh my, the new records and the new bands of our old heroes, what a special breed they are! Just think about all the privileges they enjoy and all the curses they have to suffer. Two questions: “How good is it compared to EXUMER?” and “Does it have a lot to do with EXUMER?” kept chasing me throughout all the time I had been desperately trying to come up with anything reasonable about SUN DESCENDS second endeavour. “Not so much indeed” would answer both of them quite right, I’m afraid. Mostly mid-paced, although aggressive enough Thrash (?) with many modern touches performed by SUN DESCENDS didn’t happen to turn out the most exciting musical experience I’ve ever been through, unfortunately. On the other hand, a disagreeable one it definitely isn’t either, not at all. Listening to it will do no harm either to your ears or to your taste of good music. “Kanun-Law” represents well forethought and fine performed, enviably emphatic, rock solid and highly professional Metal, really great in some parts here and there (strange as it may seem, every time I listen to it I tend to find them in different places). Maybe as a whole it lacks a bit in highlight and catchiness departments, but even though it isn’t a milestone type of record, it’s fairly good for introducing the band and its new line-up. When it comes to the full-length album though, I think it’ll demand mobilizing all the resources to come up with more catchy, more efficient stuff. With killer stuff like “Possessed By Fire” still is. We remember what Mem is capable of, so there are no excuses for him to serve us with anything but great Metal. The standards were set up almost twenty years ago, so please, keep up to them, Mem. We believe in you. For the time being, “Kanun-Law” regular CD (featuring, unlike its promo brother, EXUMER’s “A Mortal In Black” 1985 demo as a bonus) is available for $9 + shipping and handling through www.sundescends.com. You’ll surely spend your time more wisely listening to “Kanun-Law” instead of reading this, eh… “review”.