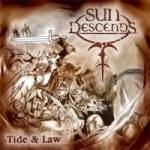 New release on this ever growing Brazilian label but unfortunately this 17 song affair doesn’t live up to the level of quality associated with Marquee until now. SUN DESCENDS was formed by ex – EXUMER bassist / vocalist Mem von Stein five years ago in the States where he resides now. The first three songs on here have originally been released as a MCD by High Vaultage a few years ago and frankly I don’t hear anything exciting in that mixture of 9th rate semi Thrash music with Hardcorish vocals, it just doesn’t cut!!! The next five tracks were featured on a self-financed EP titled “Kanun-Law” recorded during mid 2004 with a revamped line-up. Still far from being impressive / effective material, the stuff sounds a bit more enjoyable, ‘Quiet Predator’ in particular with its KREATOR overtones stamped over it (I’m talking about the real KREATOR from 1986, not the washed one that appeared after “Pleasure To Kill”), but it doesn’t make this something particularly great. Mem von Stein’s vocals are just out of place. Get a real Metal singer, a capable songwriter and then maybe it’s gonna start to be interesting. The CD ends up with a nine song live recording from EXUMER dating from 1985. Sorry but again this band never managed to catch any of my attention with their 10th rate cheesy speedy Heavy Metal. Come on, listen to “A Mortal In Black” and dare to label this Thrash or powerful Heavy Metal. No fuckin’ way! Stein’s vocals already sounded out of place and it didn’t help. Just because EXUMER were a band from the 80s doesn’t make them a great cult band. Bullshit! There’s far more interesting records than this one around to spend your cash on… this is my opinion at least.