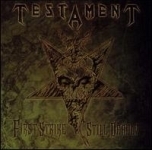 The original intention behind this record was to remix the best stuff off the first two TESTAMENT albums “The Legacy” and “The New Order”… Well, luckily this kinda superfluous idea didn’t turn into reality (due to legal problems with their old label, I suppose), that’s why TESTAMENT quickly changed their minds and came up with a way more interesting solution. Chuck Billy, Eric Peterson, John Tempesta and Steve DiGiorgio convinced former guitarist Alex Skolnick and original singer Steve ‘Zetro’ Souza to join them in the studio for re-recordings of the whole material. The not necessarily essential, yet very convincing, “First Strike Still Deadly” entitled result features eleven TESTAMENT classics with a far better, heavier production, performed by a bunch of incredibly matured and tight sounding musicians. Musically the guys quite obviously didn’t try to change too much about the songs, as everything more or less still sounds quite similar to the original versions (even Chuck Billy’s vocals – so, no death grunting here!). The only real surprise about this release is the two final cuts on the disc, namely ‘Alone In The Dark’ and ‘Reign Of Terror’, that date back to old LEGACY / pre-TESTAMENT days and even feature original frontman Zetro on vocals. Everything else is pretty much wellknown, but still very refreshing sounding and perfectly executed Bay Area Thrash that brings back a lot of cool memories on times when this movement was still very hungry.