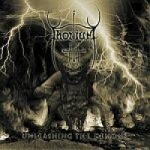 I expected something interesting here as those Danish guys have stated clearly that old Death Metal was much more interesting than the actual stuff – something I can only agree with considering how pathetic / weak and one dimensional sounding 99,9% of the ’90s and 2000 acts are compared to the originals such as MORBID ANGEL, TERRORIZER, INCUBUS (Von Scarborough outfit), POSSESSED, NECROVORE, DECAPITATION, XECUTIONER, MANTAS… A good song to me has to be a song with hooks (vocalswise and musicwise) and has to capture the listener vibes, plain and simple. Anyway THORIUM despite their good intentions has not understood it unlike let’s say the mighty DEW-SCENTED, but somehow they still manage to come up with a few enjoyable riffs (but ruined by the “vocals” on the other hand) like in ‘Nocturnal Prophet Of Destruction’, ‘Mark Of Wrath’ (undoubtely the best tune here) and ‘Altars Of Blood’ but it’s not enough to make of this a great Death Metal release. Those guys like all the others need to find two things: a songwriter who has understood everything from the old days and a real singer who has a distinct voice and who’s not just another growler. Oh yeah, even the cover of the classic CANCER tune ‘Cancer Fuckin’ Cancer’ (taken from the only enjoyable CANCER release) is a pale shadow of the original. Death Metal yes – but it could have been a Disco or a nu Metal album and that would have made no difference to me unfortunately.