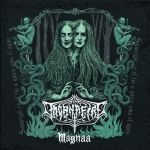 Third album, of this killer Death Metal trio from Chile. I have heard their previous works, and I am sure this is their album. The band continues with the tradition of doing mainly songs in Spanish, with text covering mainly anti-religious themes and critics towards organized religions. The music is still a great form of fast Death Metal, with a lot of use of eerie melodies, maybe DEICIDE is the name that came more to mind while listening to this, although in my ears this band is even better, as the ideas in the songs, and the execution, including a killer bass execution, shows more than what the Benton devotees have done. The fourth song on this album, the instrumental ‘Corvus Corax’, shows how great the band can be, and it is amongst the best Death Metal instrumental songs I have ever heard. Vocal-wise, I am not exactly a fan of songs done in Spanish, but that is gradually changing as here the pronunciation is venomous enough, although at times the vocalist approaches dangerous a Hardcore tone which is not exactly what the music needs. Maybe a bit more of variation and more high pitched tones would add more aggression. There is a big old school Thrash influence, but mainly from the more aggressive bands, SODOM, SLAYER and some KREATOR, as well as some early MORBID ANGEL sound. Probably the production values are too good and too clean, and a dirtier sound in the guitars and a more powerful sound for the drums could make this even better, but alas, as it is, it is a killer slab of Death Metal, with fantastic musicians and an almost perfect execution, on this their fourth and best album the band has done. www.thornafire.cl, www.facebook.com/thornafire, www.fda-records.com