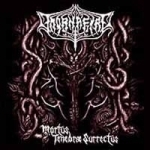 If you’re following the features on the VOICES website quite regularely, you should already be aware of the name of this band as they were more or less the reason why we managed to publish a DOMINUS XUL interview after all. The connection between both bands is pretty simple: two ex-DOMINUS XUL members (Andrés Gonzáles – drums and Alejandro Lizana – guitars) played with THORNAFIRE after the release of this MCD. According to his interview answers Alejandro had never been a fulltime member though (don’t know if this also goes for Andrés) and already went on to do his own projects. But THORNAFIRE’s founder / guitarist Victor Mac-Namara still keeps the flame burning and (in lack of a more fresh product) still continues to promote the band’s one and only MCD from 2001 "Mortus Tenebrae Surrectus". This MCD features five own compositions (as well as an intro and outro) and a cover of the ATOMIC AGGRESSOR tune ‘The Hallucination’. Musically these guys differ quite drastically from the brutal sound that their country mates DOMINUS XUL and MELEKTAUS are standing for. Even though THORNAFIRE are definitely also rooted in the Death Metal underground, their overall style is a lot thrashier and musically therefore a bit more melodic. But it’s pretty obvious that Victor and the guys are skilled musicians with a clear vision of what THORNAFIRE is supposed to sound like! This is a really cool, very well produced release for fans of raw old school Death / Thrash, totally different (speak: more honest) from all those (mostly extremely) superfluous retro bands that popped up almost everywhere within the last couple of years. The nicely packed release is still available for $5.500 (Chile) / $10 (world). Label contact: Skull Crusher Records, Juan Durán 31, Villa San Francisco, El Monte, Santiago, Chile, email: skullcrusher@tutopia.com, Band contact: THORNAFIRE, c/o Victor Mac-Namera, Toltén 1428, Villa el Arenal, Pudahuel, Santiago, Chile, email: mcnamarath@hotmail.com