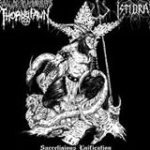 To be honest I thought THORNSPAWN was dead and gone, as I haven’t been hearing anything from them since their second full length "Wrath Of War" from 2002, but I guess that’s completely my own fault, as they have been quite productive since, with a lot of split releases and a third full length, damn me. I discovered the band a bit late, it was back in 2000 when they appeared on the "Visionaires Of The Macabre Vol. II" compilation by now defunct American label Lost Disciple Records, and soon after that THORNSPAWN released "Blood Of Thy Holy, Taint Thy Steel" and my soul was laid down in front of the American madmen. THORNSPAWN has always been purveyors of extremely chaotic and hateful Black Metal with wicked melodies hiding beneath the fistful of chaos that paints the upper level of the sound picture, together with the grim vocals. An intense tour de force of aggression and wrath. With a blazing fire of dark atmosphere, sucking the listener into a black vortex, a void of nothingness and eternal silence. The Americans are still pummeling their way into the mind of the listener, taking no prisoners with the all out attack, they haven’t strayed much from the path during the years, and in this case I actually like that, as some things are meant to be as they were, and that’s very much how THORNSPAWN do their menacing horror, a trademark USBM band that have survived the corrosion of time, and let it continue like that. ISTIDRAJ is new page for me, a band hailing from the dark shores of Singapore which delivers a melodic driven attack of slightly chaotic and dark Black Metal, with a good deal of inspiration from all over the palette, the blazingly melodies of Scandinavia, the madness from the American scene and some utter otherworldly insanity. The band has some good ideas, and delivers some nice melodic work, and I like the raw and desperate scream, and I think the band works best when they more or less copies the melodic Scandinavian style and keeps it a notch above mid-paced, as too much of the intensity drowns when it becomes too fast and chaotic, and that’s a shame, as there are some good moments to be found on the four tracks. A quite destroying split with two fierce bands that spill darkness and hate, as the title so rightfully suggests, this is grim Black Metal of the skullsplitting kind, with some good melodies hidden beneath the chaos and darkness, delve into it, though watch out, if you first get caught in the vortex, there might not be a way out again! More info behind the gate of Nanna: www.facebook.com/thornspawn, www.facebook.com/pages/istidraj/87499238946, www.ibdclabel666.bigcartel.com