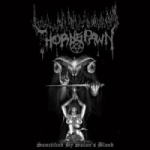 This veterans of the US Black / Death Metal scene return with probably their rawest record to date. With a very raw sounding production (man those guitars sound like recorded directly to the board) which make everything to be a lot in the high treble side, they attack mercifully with 8 new songs and an outro. More than once they fall in the very chaotic Black Metal style, you know the one that made BLASPHEMY and SARCOFAGO well known. But then again they also sound a bit like ANGELCORPSE, which means they do have come control into that maelstrom of impure music. While I am a fan of all things in a speedy mood, I just feel these guys sometimes sound too damn similar from song to song, and they give little variation on the drums and vocals, well, actually both played by the same guy. Yes, these demons manage to capture the sound of old times in a way, and yes it is highly Satanic and blasphemy is all over, and it does possess (your soul) with some blood chilling songs like ‘Coven Of The Malicious Fire’ (one of the few where they do use a variety of tempos), but there is something missing. Or perhaps, there is something abundant here. Yes, they need to use a bit more variation on the drumming and give more power to those damn guitars, or to the whole recording. I don’t know, some bands are a bit reluctant to sound better in the studio, thinking that will take away their underground essence, but the few ones who dare, open up the gates of hell in a greater form, without losing their dark way. As it is, this is a good record, just above the half hour mark which makes it just the right amount of time for this kind of music. I suppose this is one of those few records that on vinyl, and due to the more bass sound of that format, will be better to get hold of. www.thornspawn.com