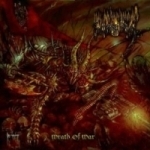 I have a soft spot for non – Scandinavian Black Metal bands because they often bring a healthier approach to the genre. One can only admit that the infamous Norsecore bands are currently killing the scene with their artificial modern sound and silly experimentations. Fortunately enough, some other bands exist that maintain the black flame burning dark. THORNSPAWN is one of those bands, and I am glad to say that “Wrath Of War” is a hell of an album! THORNSPAWN deliver a belligerent form of malignant Black Metal, very similar in a sense to what BESTIAL WARLUST made us accustomed of. I am sure these American maniacs (from Texas) are classic Heavy Metal fans, and it shows especially in the guitar department, as you don’t get the usual monotonous rhythm repeated again and again neither horrid dissonant solos. In fact, these musicians made efforts to come up with a sophisticated (and not technical) music, with rhythm changes and a concern for originality, but within the frame of a well-known recipe of power. I can even risk here a comparison with ANGEL CORPSE as THORNSPAWN explore the same territory through the Black Metal angle. While listening to “Wrath Of War” I found out some similarities with brutal Black Metal bands like IN BATTLE (remember this SETHERIAL side-project?) and ANTAEUS, or with a Death / Black outfit like ABHORER. From time to time, THORNSPAWN lack some cohesiveness but that only reinforce the feeling to listen to old school extreme Metal. The drumming style of Blackthorn may sound awkward at times, but it doesn’t weaken the impact of each of the compositions, far from that, and note that Blackthorn also handles the vocals, in a very Pete Helmkamp’s way. The band conclude the album with an experimental piece (‘Aftermath Of War’) and I can’t help but to think about a CELTIC FROST delirium! Add to all this a superb cover art by Kris Verwimp (one of his best really, and I think a vinyl version should be appropriate to fully appreciate it!), and I suppose I made myself perfectly clear about the greatness of “Wrath Of War”. So don’t waste your time reading my silly prose, buy this fucker and… LET’S START A WAR!