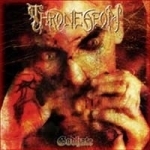 Even though this is supposed to be the last THRONEAEON release, fans of the Swedish bunch shouldn’t be too much disappointed as the band only decided to change their monicker into the slightly easier to remember / easier to pronounce GODHATE. But I seriously doubt that this business move will affect their musical style in any way in the near future… Just like their previous two outputs (the "With Sardonic Wrath" MCD and "Neither Of Gods" full length) also "Godhate" (the album) offers us a really fresh sounding collection of brutal, yet very powerful and clearly produced, US style Death Metal. Their main inspiration probably will always be Glen Benton’s ungodly horde, but as opposed to DEICIDE, THRONEAEON by no means sound uninspired or burned out in any way (yet?) and instead know to convince me with a good number of really exciting compositions. While listening to the nine tracks on this album it becomes pretty obvious that the guys are on the right way to a style on their own after all. Ok, the DEICIDE overtones are still there (nothing wrong with that), but they more and more are adding a personal note to their songs, which is great. ‘Blackwinged’, one of the tracks towards the end of the record for example even has a classic SLAYER reference in it. So, everyone into brutal Death Metal should definitely check this nicely packaged new offering out in order to experience the band’s big improvement! It’s kinda weird though that in four of the songs the drum tracks have been recorded by DARK FUNERAL / DEFLESHED skinsman Matte Modin, considering that the band was formed by drummer Roger Sundquist… For all further info check out www.godhate.com or www.forensickmusic.com