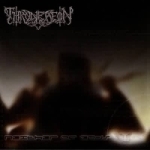 Here’s finally the scheduled debut album of Sweden’s answer to DEICIDE called THRONEAEON. Okay, I have to admit that it wouldn’t be fair to baptize THRONEAEON as a simple DEICIDE clone, because main man Tony Freed and his nasty customers have musically improved compared to the MCD "With Sardonic Wrath" and their demo tapes, especially when it comes to the variety of the songs. Nevertheless I don’t think that "Neither Of God" is a quantum leap in songwriting. Still you get ultra brutal Death Metal with a massive Florida touch, and – believe it or not – here and there are also some hidden melodies (just listen to ‘Seven In Heaven Seven On Earth’), which makes "Neither Of God" more interesting. But all in all there are definitely no major changes compared to THRONEAEON’s old material, therefore I can recommend this album without any doubts. Also the skull fucking production in Studio Underground (e.g. CARNAL FORGE, NECRODEATH, October TIDE) makes this album essential for every deadbanger! Last but not least the exceptional booklet design is worth your attention.