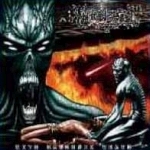 Even though the nucleus of this Swedish bunch is already around since 1991, it still took THRONEAEON further four years of member and name changes to finally enter the Death Metal underground more seriously. This deadly and very self confident four piece used to put out demos in 1995 ("Demo’95") and 1997 ("Carnage") and even turned down an offer to participate in a split CD with another Swedish band (some of the tracks that originally were supposed to appear on that split CD ended up being released on the "Carnage" demo). In 1998 they recorded the material for "With Sardonic Wrath", which originally came out on the Danish Helgrind Productions label. Due to the fact that THRONEAEON have been signed by Hammerheart Records subdivision The Plague in the meantime, this mini CD just got re-issued, probably in order to promote the upcoming first full length a bit better. Musically THRONEAEON will easily appeal to everyone into powerfully produced, raw and brutal Death Metal in the good ol’ DEICIDE style, with the main difference being that the Swedes still sound more aggressive and hungry than Glen Benton and his fellows. So, all in all this is a really promising start already, which should easily establish the guys in the underground and makes me pretty curious regarding the things that are about to follow in May 2001.