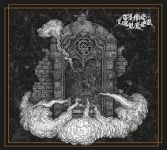 TIME LURKER is a one man Black Metal band from France. Their self-titled debut album comes after 2016’s "I" EP and a single off this album, "Ethereal Hands", which pretty much showcases what this band is about. Every instrument is handled by Mick, who definitely has a grasp on his craft. Production wise, everything sounds great. Although I think the drums are a little muffled, the guitar tone is good since it doesn’t has the stereotyped shrill of Black Metal bands and the bass fills nicely all the tremolo riffing. The mix is dense and a tad muddy, but it fits the mood of this album perfectly. I like the fact that the vocals are almost buried in the mix when the album starts, but as the album plays along, they become more prominent and also, an integral part of the listening experience. I am not usually fond of Atmospheric Black Metal. I tend to lose my attention quickly since bands of this style tend to repeat themselves after 2 or 3 songs, ie. extreme heavy parts with insane vocals and calm segments with clean guitars and pads. In this department, TIME LURKER is not bringing anything new to the table. But suddenly I found myself paying a lot of attention to what was happening in each song. It amazes me how smooth the songs intertwine and how they react to each other. There is complexity and great taste in the composition of this collection of songs and the instrumental parts include all kinds of different sounds and textures. All I can say is that TIME LURKER has made an impressive debut album. And I can put this next to my DRUDKH, BURZUM, DOWNFALL OF NUR and WODENSTHRONE albums. Great job Mr. Mick! Go show a well deserved support here: www.facebook.com/timelurker. And get this great album from their label here: www.lesacteursdelombre.net