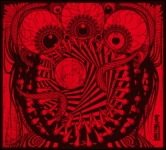 Formed in Portugal, it was a bit weird that they have a name that seems to be in German… and also a song title for an ANAAL NATHRAKH song. This debut album at first impression sounds a lot like many of those “orthodox” Black Metal bands, or to say it in a clear way, they have a way of playing that is technical, with some progressive touches and a great perfomance, with many dissonant riffs and a hypnotic aura. Names like later MAYHEM, DEATHSPELL OMEGA and some later IMMORTAL touches came to be invoked as a reference. And this might sound weird, but I can also sense some sound of early PESTILENCE here. This album has a charm of its own. I am no big fan of very technical music, yet I know that if done right within a limited genre as extreme Metal it can add elements that will push boundaries further without compromising the primordial core. Well, TOD HUETET UEBEL is doing so here and now. The drumming is fantastic, the riffs are hypnotic, and the vocals… the vocals are truly a jewel here. From agonizing laments, to eerie whispers, to deathly sorrowful screams. It is all there and used with a great variation that it is ice chilling as one can hear in the song ‘XII’. And, oh, yes, titles of all songs are Roman numerals. And the lyrics, they are also of pure genius. Written in English and Portuguese, they deal with the malice in man.They have a very poetic and chaotic way of expressing most human feelings, specially despair whilst facing death. The production values are also very good, with heavy guitars and a full sound but without sounding modern or compressed. And, yes, there is a heavy, and I mean heavy Prog Rock influence through all the album. The kind of Prog Rock that is mesmerizing, trance inducing, dark and mysterious. Songs are well over the 5 minutes mark, some even close to 10 minutes, but they do not tend to sound tiresome, it is all so well crafted that this goes unnoticed. Then, after a second listening, this one grows more and more. This is a monster of an album, and like black magick, each new time you listen to it, things appear. If evilness was to be coverted into music, I am sure it will take a form similar to this album. Name any veteran Black Metal band trying to do their masterpiece, and it will fall short compared to this. Contender for album of the year. This is what black magick is all about. www.facebook.com/todhuetetuebelofficial, www.facebook.com/cavernaabismalrec