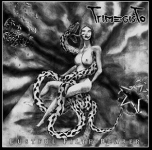 Spawned from the never-ending chasm of Chilean Death Metal substratum TRIMEGISTO are presenting two studio songs plus one live track. Since this release is self-financed there is no vinyl or CD, just a simple CD-R. Hopefully some respectable label takes care and maybe, maybe there will be a 7". Because the music needs no hiding behind more well-known names like IMMOLATION, SADISTIC INTENT, INCANTATION or whatever your favorite rotten Death Metal band may be. Deep grunts, sometimes tending to subdued shrieks, much dynamic by tempo changes (although it is mostly fast-forward) and interspersed chaotic guitar soloing. Even the sound, having the self-financed aspect in mind, is pretty awesome. Every instrument has its portion in the overall result. A quite important consideration, even the finest Death Metal riffs can be destroyed by the wrong sound, like on the latest SOULBURN album. The live track ‘Never Christ – Always Dead’ (taken from the debut) also surprises with a voluminous sound. While writing this review I discovered TRIMEGISTO already released two full-length albums, namely "Subterranean Streams" (2008) and "Awake From The Blood" (2010). So hopefully this self-financed single is just a prelude for the next album! www.facebook.com/trimegistodeathmetal