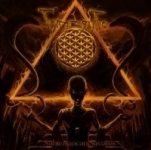 Call me childish or prejudiced, but as soon as I found out that the line-up of Chile’s TRIMEGISTO features former DOMINUS XUL guitarist Claudio Salinas (who also takes care of the vocals nowadays), I already knew that I was going to like the nine tracks on “Subterranean Streams”… To understand this, I probably gotta tell you that “The Primigeni Xul (I Condemned My Enemies)”, DOMINUS XUL’s one and only full length from 2000, is still among my alltime favorite Death Metal releases ever! In the info sheet that I received along with this promo CD, there’s also talk about ex-members of MELEKTAUS (another Chile fave of mine!) and SHEOLGEENNA, which increased my expectations even more! Well, ok – I gotta confess that I’m not familiar with SHEOLGEENNA (apart from my knowledge about their split-up), and didn’t manage to locate any MELEKTAUS member in the TRIMEGISTO line-up either (at least none that played on the MELEKTAUS album or promo)… But as long as the result turns out so convincing already, I couldn’t really care less! Just like DOMINUS XUL and MELEKTAUS also TRIMEGISTO have chosen the path of dark, unholy Death Metal with pretty obvious influences from INCANTATION, IMMOLATION, old MORBID ANGEL and the likes. Claudio’s brutal voice is of the deepest kind, yet very charismatic and in that respect already very close to Ross Dolan and Craig Pillard in their early days. Very impressive indeed, especially if you consider that he was “just” a guitar player in the past. While MELEKTAUS and DOMINUS XUL first and foremost do / did their kind of INCANTATION worshipping, TRIMEGISTO take these influences to the next level and incorporate a lot of unique own elements to the overall morbid brutality. Diversity is the keyword here! Their songwriting offers a lot of interesting little bits and pieces that constantly keep the listener’s attention, instead of just going for the typical “full force ahead”, “take no prisoners” mentality that most other brutal Death Metal acts focus on these days. It simply doesn’t get boring. In fact, the first time I listened to it, I was still a bit insecure whether or not I was really going to enjoy it as much as I thought I would… but the more you listen to it, the deeper you are loosing yourself in their sick musical creations! To me this is without a doubt a highly impressive debut of a very promising band! For all further info check out www.myspace.com/trimegisto, www.obscuredomain.com