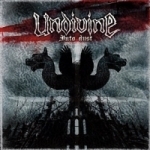 I’m not completely sure when I’ve listened to an album the last time which has such strong bonds to the great era of Gothenburg Death Metal. In some way it’s really refreshing to listen to an album where the guitars are really dominating the scenery. UNDIVINE was founded in 2005 in Gävle / Sweden and “Into Dust” is their first release for the German underground label Northern Silence. After the extreme hype end of the last decade with a handful of bands becoming mega seller plus the release of nearly every shit on two legs the young band is doing a fine job. Naturally you should not expect a miracle of innovation – the style is just too worn out – but songs like ‘I Dream Death’ or the title track with a “slight” HYPOCRISY touch are giving “Into Dust” the necessary fresh approach. But UNDIVINE still follows the traditional ways without incorporating any new influences which seems to be so popular these days (others, including the Voices crew, would call these new influences pure contamination). In total a solid release for all fans of the good old times of melodic Swedish Death Metal. More info at: www.northern-silence.de, www.myspace.com/undivineswe, www.undivine.se