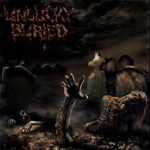 Out from Vitebsk, Belarus crawls this 5-piece act, sticking to an unoriginal name UNLUCKY BURIED. The band was founded in 2002, and so far they have just released one studio album in 2009, titled "Blast From The Underground". The album itself contains 6 of their own songs and a cover of the Polish Death Metal tornado VADER’s ‘Sothis’, added with a video clip for their song ‘Inexplicable Need To Kill’. Brutal and relatively technical even, Death Metal this surely is but unfortunately it sounds tedious, sloppy and simply downright boring, without offering much else than bare, white bones being exposed under the hard daylight at the end of the day, so to speak. In between the songs they have used some takes from some (horror) movies, which basically is a nice idea but even that’s been used on Death Metal albums about a couple of thousands times (if you allow me to exaggerate just this much). Those cookie-monster vocals don’t help their situation much either, I am afraid. A few pretty ear-appealing moments here and there on this record (like ironically their own cover version of that VADER song), unfortunately don’t save the album from sinking into a bottomless pit of average Death Metal releases. So, it can openly be declared that this album has met its doom. UNLUCKY BURIED can be found here (if you find it any necessary after this review): www.myspace.com/unluckyburied, label: www.morehate.com