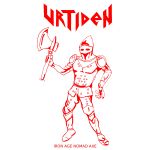 Another one-man project, another meaningless Black Metal release? Thankfully not! URTIDEN is the brainchild of Mikael Holm (from Swedish Black Thrashers AGGRESSIVE MUTILATOR), where he is responsible for everything. Yet instead of the umptieth Black Metal ego trip, URTIDEN is devoted to a very unique way of playing old fashioned Heavy Metal. The atmosphere of the songs is pretty much blackened, the compositions are rather simple, but effective and on point. Somehow it’s a kind of Punk spirit that lives in these songs, as far as the calculated simplicity is concerned. And this interpretation of the idea of Heavy Metal is very enjoyable on the first URTIDEN demo recording “Iron Age Nomad Axe”. The opening ‘Till Attack Att Rasera Tron’ might be a little less remarkable. But with ‘Die By The Slayer’, we have a song that stays in the auditory canal like an ear worm. The final ‘Ringen I Berget’ has guitar hooks that also stay in mind and some epic choirs. It’s been a long time since I heard simple old fashioned Metal stuff of this excellence, so I really look forward to more music from URTIDEN in the hopefully distant future. For now, check https://urtiden.bandcamp.com to find out what I’m talking about.