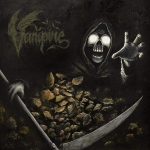 It’s hard to imagine that there was no Metal band with the simple name VAMPIRE until now, but it’s really true. Crazy, isn’t it? Now a four-piece from Sweden uses this bold name for their cause. Somewhere in the middle of Death, Thrash and Black Metal, VAMPIRE ravage the woods. They know how to play, what to play and what to sing about, yet they missed to set some real highlights. Short melodic leads like in ‘Howl From The Coffin’ or ‘Ungodly Warlock’ are somehow not enough to arouse serious attention. Before you get me wrong: VAMPIRE are not bad by far, a band that calls one of their songs ‘At Midnight I’ll Possess Your Corpse’ can’t be that bad. It’s just that they till the same soil as lots of other bands, and those are mainly more catching, refreshing and devastating. VAMPIRE have their best moments when they slow down a little bit, like in ‘The Bestial Abyss’. But those moments aren’t enough to catch my attention for a longer time. When I take a break from listening to the album in order to have a cigarette, I can hardly recall what I just heard. And that’s no good omen… If I had to, I’d rate "Vampire" four out of ten points. If you’re into the raw and unpolished stuff, you might check them out. More info at: www.vampireofficial.com, www.facebook.com/vampiretheband or www.centurymedia.com