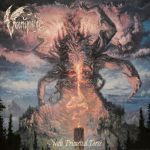 Three years passed since the self-titled album come out, that established this band from Gothenburg as one of the most promising acts of the last decade. It did mainly because VAMPIRE have good riffs influenced from some of the best Metal bands from the eighties, like BATHORY, SLAYER ("Show No Mercy" and "Hell Awaits" years), POSSESSED, MERCYFUL FATE, KREATOR, DEATH ("Scream Bloody Gore" years) and CELTIC FROST. "Vampire" has been a very good debut, maybe with some defects of inexperience but still enjoyable for who really knows the obsession for the 80s sound. The new album "With Primeval Force" reaches the goal to let observe an improvement of their skills in the songwriting process, where they put more elements from NWOBHM to old school Thrash and Death Metal. ‘Knights Of The Burning Crypt’ is a perfect opener, a mix of the best DISMEMBER and DISSECTION (above of the ending part) with a simple structure and catchy riffs. ‘He Who Speak’, used for a cool promotional video-clip with all the horror stuff we love to watch, keeps the quality on top and the easily impact with a good work of the rhythm section. These two songs, together with the vicious ‘Skull Prayer’ and the hammering ‘Ghoul Wind’, are the straightest tracks, in line with the previous album. Rather, we can talk about some fresh additions to the sound of VAMPIRE for songs like ‘Metamorphosis’, ‘Midnight Trial’, ‘Revenants’, ‘Initiation Rite’ and ‘Scylla’. Here the Swedish quintet turn out capable to curate the arrangements in a refiner and more complex way than in the past, where the Heavy Metal influences are stronger and from which they shape a personal touch. It’s a similar process that other Swedes went through, for examples TRIBULATION, MORBUS CHRON and NECROVATION, but VAMPIRE hold the progressive intimations at bay to focus their energy in producing heavy, dark and captivating music. The whole performance of Hand Of Doom on vocals is excellent, his raspy style is pretty different to the classic Death Metal growling and, in fact, he reminds of legendary singers as Jeff Becerra, Mille Petroza, Tom G. Warrior and Roger Petterson (MERCILESS). The vintage guitar sound is another important factor for VAMPIRE, it’s clear and few compressed, you’ll love it a lot if you appreciated, for example, the guitars in that masterpiece called "Stinking Up The Night" by DEATH BREATH. The pictorial, kind of Lovecraftian artwork by Nick Keller well adapts itself with the nightmarish lyrics of this album. As they are used in the early 90s, Century Media Records surely got a good deal to catch this band after the 2012 Demo, when they still had to develop their sound but they formerly had good taste. Therefore, "With Primeval Force" confirms the merit of the Swedes, awarer of their improved ability as songwriters and musicians. It’s a dynamic and iridescent opus, impressive just after the first listening and it has some refinements that are so infrequent in most of the ordinary Death / Thrash Metal albums that come out lately. The same Death / Thrash label is too restrictive now, as I said, there are many traditional influences in the mix, anyway who know what VAMPIRE will do in the future, I surely hope for another step forward without to lose the essential 80s Metal roots. Keep in touch with the band at www.facebook.com/vampiretheband or visit their label website at www.centurymedia.com.