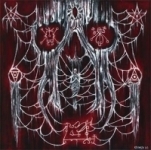 It’s uncommon that the hype boiling around a forthcoming release is unexaggerated. Typically people work themselves into a fever pitch, wherein no amount of artistry can match their inflated expectations. But this band – VASAELETH – made such an impression with their 2009 demo, and an equally forceful follow up with their EP, that their fans, myself included, knew by the quality of the material, that in no way would they disappoint. Some even say VASAELETH are the most important American Death Metal band in the last ten years, which should have NILE looking over their shoulders. This debut album, "Crypt Born And Tethered To Ruin", does little to dissuade me of such pronouncements. First, but not foremost, is the stirring cover-art, drawn by the same masterful hands who drew the last INQUISITION covers. Second, and most important, are the songs. Both of the tracks that appeared on the demo cassette were re-recorded for the album, so fans of the demo and EP need not worry. It’s customary for a band with such strong demo songs to use them again. But VASAELETH only had two, and this is an eight song album. Here, one might begin to think the rest of the album is liable to underwhelm, but the opposite is true. The other six songs are just as powerful. VASAELETH are masters of the American styles developed by INCANATION and NECROVORE. The songs sit individually, yet fit seamlessly into one another, affecting a ritual-esque, funereal dirge of Metal. If smoke could cut, it would sound like VASAELETH; ghostly and sharp as a knife. Give your salutes to this band. More info at: www.myspace.com/vasaeleth, www.profoundlorerecords.com