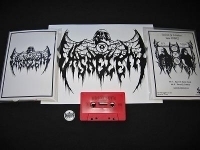 Bask in the sins of hell, ye disciples of the profane. The last two years bore witness to a surprising upswing in the quality of underground bands. For a time, Sweden lead the charge with INVIDIOUS, DEGIAL and EVISCERATED, but since 2008, bands of equal, or greater, potential have sprung up in Finland, Germany, Spain, Australia, and now, the United States, once more. No one will deny that America has helped give Death Metal its form, but one could reasonably argue that its importance to the scene has diminished somewhat. No longer. VASAELTH, a brand new band from Georgia, have unleashed a limited, two-track demo tape, hopefully to a much-deserved thunder of applause. There are obvious influences like INCANTATION, but not even INCANTATION have sounded quite so evil and cavernous in years. The tape may be hard to get a hold of, as it was limited to 200 copies. With any luck, it won’t be gone for long. I predict a cult classic soon enough. www.myspace.com/vasaeleth