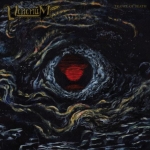 “Trance Of Death” is probably one of the most anticipated Death Metal releases in quite a while. After the self-titled debut EP in 2011 many people were eager to hear a full length release by this band – but somehow things needed a bit more time than they usually do. A lot has happened within the band and one definitely can hear that. I was personally also quite excited to hear some new material mostly because of one fact: back in 2013 a tour happened which featured TRIBULATION, KETZER, VENENUM and ALCHEMYST. Three of said four bands are still active, with one artistically leading the pack – TRIBULATION. While KETZER clearly failed to rip off what “Children Of The Night” was, I was even more excited to see in what direction VENENUM’s new material will go. And I totally got what I expected, but more on that later. “Trance Of Death” starts off with a cello piece that sounds exactly like what happens on the soundtrack of 2015’s horror flick “The Witch”. This is a very positive thing to say since people who have seen the movie will know that the soundtrack enhances certain moods quite intensively. With the following first real track ‘Merging Nebular Drapes’ all hell breaks loose. Especially NECROVATION with their self-titled second full length come to mind. A band that is very prominent within the fast paced material on the A side of the record in general. Anyway, a great song with a killer verse riff – very memorable and heavy. More than half into the song the mood changes and things get more calm, and thereby also more TRIBULATION. Track number two ‘The Nature Of The Ground’ starts again very aggressive and fast, and as with ‘Merging…’ there’s a very distinctive part to be found this time only as the chorus. Especially the drums are something that really grabs the listener’s attention throughout the whole track and thereby elevates the music to a whole different level. The song then gets calmer only to slowly increase its speed which ends in a total devastation. This is again one of the many moments that clearly reminded me of TRIBULATION. Check out the song ‘Specters’ at around 2:40-3:00 and you’ll see what I mean. The closer of side A comes with ‘Cold Threat’, my personal highlight of the record, I would even go as far as calling it a “hit”. Doom-laden soundscapes and ghastly leads lead into yet another slow part which increases its speed (maybe not the best idea to use the same stand-out element in two consecutive songs, but that’s just my opinion) until it climaxes into a swirling Death Metal onslaught. A very catchy chorus seals the deal and makes this the track of the record. What comes now is the “Trance Of Death” trilogy. One song split into three parts with lots of guitar doodling and musical nick-nack. While the mental parts sometimes are able to stand on their own it’s the more calm and melodic stuff that again really does what the music on “The Formulas Of Death” does. Lots of Blaze Bayley and post Blaze Bayley IRON MAIDEN combined with psychedelic influences, Hammond organs, PINK FLOYD – ish guitar work and even more psychedelia on top of that. The last part of the trilogy marks a 14-minute closer that somehow summarizes everything that has happened prior on the record. It’s calm, melodic, heavy, mental and on a musically extremely high level closing with the same notes as in the cello intro. As mentioned before, the record was exactly what I expected it to be. Highly influenced by this specific aforementioned Swedish band with the exception of “Trance Of Death” being more brutal than what they released back in 2013. Don’t get me wrong, this is a great record, no doubts about that. The songwriting is top notch as well as the execution but is it really “the next big thing”? I really don’t think so because there is no individuality within the music itself to be found nor is the album as a whole breaking any new ground as mentioned in a very popular German Heavy Metal magazine. Journalists have anyways too much power over the success of a record and a band, but this is yet another story. Now it’s your turn to get your ass up and check that record out to make up your own opinion. Do so via www.munenev.com, https://venenum.bandcamp.com and www.sepulchralvoice.de.