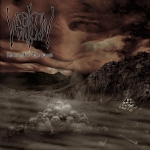 This album is already available for quite a while now, five years, to be more precise. But the Hungarian three-piece VERILUN never before made an appearance on these pages. So, alongside their recent second album “Through Fire… In The Sun”, the debut album “Home For The Dead” will receive some more or less warm words here as well. Released two years after their self-financed EP “Blood Moon” (which, by the way, is the English translation of VERILUN), this album featured all the three original songs of the EP again, in re-recorded versions. And what can be heard on “Home For The Dead”? A journey through nearly all styles of extreme Metal, from Black Metal over melodic Death Metal to modern Death Metal and Grindcore and back, of course! Despite the quite amazing variety of the album and the more than solid musicianship, I personally am not really pleased by the stuff VERILUN present us here. In a lot of moments, the riffs and ideas sound cobbled together, as if they were chosen haphazardly. Thus some very good attempts and interesting intonations of harmonies are destroyed too soon in my ears. On the other hand, there are more than enough moments in which one can sense the potential of both the band itself and their approach to songwriting. So I need to check out the new album of VERILUN in order to find out if they kept their course and advanced in songwriting. As far as “Home Of The Dead” is concerned, my verdict is quite clear. In 2013, VERILUN were a band with a lot of potential on the way to find a unique and progressive style of extreme Metal. If you need more information, visit www.facebook.com/verilun or check their label (in charge for both albums of the band): www.sliptrickrecords.com