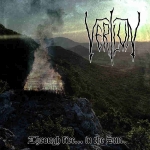 VERILUN
Through Fire... In The Sun
(Sliptrick Records)
58:22min

Variety was the first word that came to my mind after the first spin of "Through Fire… In The Sun". Barely an hour filled with well-crafted musicianship, varied songwriting driven by energy and bursting with strength and power. On their second full-length VERILUN from Hungary are tracing an arc from Black Metal over melodic Death Metal up to progressive Metal. After a short intro the journey starts, each song clocking at about seven minutes. What impressed me the most are the guitar melodies and solos respectively the never ending stream of catchy harmonies. It just never stops, throughout the whole playing time there is simply no idle running. Epic moments, which are often underlined by keyboards, alternate with aggressive parts. The only rest period is the short instrumental ‘Gamma Binarius’, which is a little gem itself, a soundtrack like track which reminds me of movies like "Conan the Barbarian". Obviously a little homage to Basil Poledouris. But shortly after VERILUN are back on track with their unique mixture of epic Black and melodic Death Metal. What is totally missing are female vocals, spoken words and medieval instruments. Many bands use this kind of elements to create atmosphere, but the songwriting skills of VERILUN simply do not need such gadgetry. The vocals are done grim and low-pitched with slight variations. Some small-minded people may dislike the rather long instrumental passages, which could be discovered at every more Progressive Metal band. At some moments you are not really aware it is Black / Death Metal you are listening to. But I do not mind and everyone daring enough to discover an album full of interesting and fascinating moments should visit: www.facebook.com/verilun, www.sliptrickrecords.com