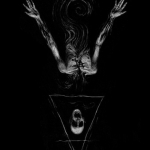 “Codex Perfida” is a demo I’m aware of since its release almost one year ago but I somehow never really understood its content because of simply not paying as much attention to it as required. After hearing all kinds of praising on the internet after its release I checked it out on Bandcamp but wasn’t that impressed at all. A while later a friend of mine played it to me at his apartment but it didn’t click either. Fortunately enough it all changed last week. When I first started listening to it for this review I still had the same opinion about it after the first two run-throughs but with the third it suddenly clicked. The haunting piano driven intro which is first of all not only the best way to start this demo but also a great idea (and execution) in general sets the mood for the upcoming 24 minutes perfectly. Slowly it constructs its way through its 2:43min duration by adding more and more bits and pieces here and there only to fade into nothingness. This said nothingness is soon destroyed by great and classic Death Metal riffing combined with even better and from time to time very innovative drumming on ‘Confessio’. VIRCOLAC add a lot of dynamics to this second track which makes it extremely interesting to listen to. The very slow and eerie center section / finish definitely is a highlight. Very atmospheric and impressive music that again builds up small details in the course of the composition. As with the intro, ‘Confessio’ ends with a ghastly piano melody that leads into the third track ‘The Worm Turns’ which starts quite soft with clean guitars and spoken words that later turn into very depressive and heavy soundscapes. This time the song gets faster in its center section and finishes with a nice back and forth of faster and slower moments. ‘Effigy’ lays the demo to rest with some more speed and aggression as well as some calm moments. “Codex Perfida” definitely is a very strong and impressive release displaying a band that is well-ordered and very mature sounding from start to finish. I’m really excited about what VIROCLAC will unleash in the future but it sure as hell won’t disappoint. If you still do not think the way I and many others do, I suggest you to check out www.facebook.com/vircolacdeathmetal and www.darkdescentrecords.com.