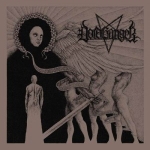 The Polish hordes from VOIDHANGER are back! Two years after their well received debut album "Wrathprayers", this three-piece from hell is back with a vengeance for their second full length "Working Class Misanthropy". Speaking of misanthropy, this is one keynote of this album for sure. The other are hate and anger. Just listen to the opening Black Thrash tornado ‘No Ground To Hold’, that sounds damn pissed off. But the tempo is not always at full speed. For example, the title track includes some fine simple slower SLAUGHTER style riffing and a not too decent hint on HELLHAMMER and CELTIC FROST before drummer Priest intensifies the speed in a very massive way, giving the song a feeling close to Crust Punk. These two songs definitely show what this album has to offer, even though the fast, hateful attacks are in the majority. Be it the two songs sung in Polish, ‘Dni Szarańczy’ (in English: ‘Days Of The Locust’) and ‘Uniesienie’ (means: Exultation), or the crushing ‘Scorpion’ – no one has to expect mercy. VOIDHANGER even sing ‘A Song For Lennon’, and it’s not for English soccer player Aaron Lennon, but the famous John Lennon, whose peace anthem ‘Imagine’ was satirized lyrically. In the end, ‘Days Of Cathartic Solitude’ and ‘Ilsa’ finish the listener in a hellish manner. Besides the not too long playing time, that keeps the tension, "Working Class Misanthropy" lives from its quite spartanic production that fits the fire power of the album perfectly. These Poles take no prisoners, so join them in their battle at www.facebook.com/voidhangerofficial, or check the label: www.paganrecords.com.pl