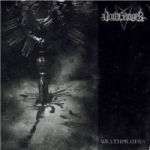 Madness for some blistering blackened Death / Thrash Metal just never seems to stop. Not that it never even should but it seems like tons and tons new line-ups are constantly crawling out from their filthy asylums, to create a merciless havoc on the face of the earth. New members to these dark armies have been hired again – and one of those newest members belonging to this vast army of world enslaving and destroying legions, is called VOIDHANGER; a Polish 3-piece band that is commanded by such aliases as Warcrimer, Zyklon and Priest, and who have all earned their spurs in some other hellish hordes before, too. What VOIDHANGER’s debut release represents, it represents it with a glorious attempt to get heard – and they surely have adopted all the weapons for their total unholy war that just allow them to get heard once and for all. A bit more seriously speaking, abandoning all irritating metaphors for a short moment, these armed men in VOIDHANGER play the kind of blackened Death / Thrash Metal that is always a real pleasure to listen to. It goes under my skin like a hot blade through ice cream, urging me to turn the volume button louder and louder, while enjoying my Heineken ice-cold. From what VOIDHANGER reminds me of, they remind me of bands like Norwegian blackened thrashers AURA NOIR and Aussie’s goat worshippers DESTRÖYER 666 on steroids. Filthy, raw and relatively simple yet extremely punishing tour de force has always been close to my liking as far as Metal music overall is concerned – and this Polish trio VOIDHANGER manages to creep pretty damn near to those standards to receive 5 precious, gold-covered goat skulls from me, as a sign of a well earned triumph of theirs. "Wrathprayers" kicks ass on all levels, simply devastating and slaughtering its listeners to the very last one. www.myspace.com/voidhangerofficial, www.witchinghour.pl